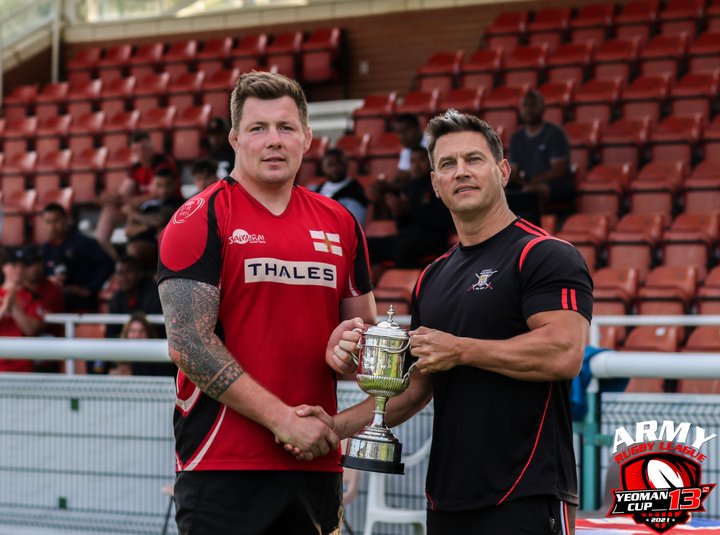 The Gunners followed up their Army RL Nines success by doing the double and winning the Yeoman Cup!

On 23 Jun 21 the scene was set for The Yeoman Cup, 12 teams, Army RL scouts on hand and even the sun was out! The draw, made by Rich Wyerth from BFBS Aldershot, promised an exciting set of group games. Last years winners 1 Royal Welsh pitted against the always strong 1 Yorks, standing out amongst many other games.

As the group stages progressed the groups were becoming clearer as to who would progress, apart from the surprise package of 1 Rifles in group 4, due to the draw they would start later in the day. Group 4 consisted of 3 RLC, 16 RA and 1 Rifles, with 3 RLC and 16 RA showing strongly in the Nav 9s a fortnight ago and, to the delight of the Infantry RL management, also 1 Rifles who showcased an array of talent and skill to easily beat two strong units and progress out of the group.

With each of the group winners progressing through to the Semi finals the scene was set for an exciting flourish! Semi final one was between the Nav 9 winners 12 RA and surprise package 8 Bn REME, with an experienced and hardened team versus a young and energetic side. 12 RA eventually won out In the first semi, but 8 Bn REME showcased that the future is bright for REME RL pushing 12 RA all the way. Semi final two was an all infantry affair between 1 Yorks and 1 Rifles, this was a bruising encounter to put it politely. With sheer physicality and skill throughout the first half was a tight knit affair, in the second half the 1 Yorks took two quick tries well which broke the resolve of 1 Rifles. With 1 Yorks coming out winners eventually, the scene was set for an exciting Final.

So the Finale pitched Nav 9s winners 12 RA versus 1 Yorks, with the scene set and the sun fading the final kicked off. 1 Yorks starting the fastest scoring two unconverted tries quickly. Eight-nil to 1 Yorks and after that second try strong words were had behind the posts within the 12 RA huddle. What ever was said did the trick with them slowly winning the contact battles and grinding 1 Yorks down. Throughout the rest of the game 12 RA slowly added to the score, with some amazing phase play and sheer power. With 4 minutes to go the score was 20 – 8 to 12 RA and 1 Yorks started to turn the screw, fighting back into the game, however the 12 RA wall stood strong and held the fight back off.

12 RA winning the Yeoman Cup 20 – 8, to add to the Nav 9s trophy already won this season.
Throughout the day Army Rugby League Coaches and Committee were present and were exceptionally impressed by the standard displayed. With individual awards up for grabs the new Assistant Coach Pte Paul-Rientoul had the task of picking the ‘Rookie of the Tournament’, whilst Head Coach WO2 Thompson had to decide ‘Man of Steel’ for the Tournament. Both coaches were showcased an array of talent and found it hard to eventually decide on their category winners, but the decision was made . . .

 Lawson Cup Rd 1 Update The 2021 Army RL Inter-Corps competition got under way in Aldershot yesterday, with three cracking games, culminating in a win for the Sappers in the Woolwich Cup.

12 Regt RA win the Army RL Nines!  The Gunners went home with the Cup from the first Community RL competition held in 2021.