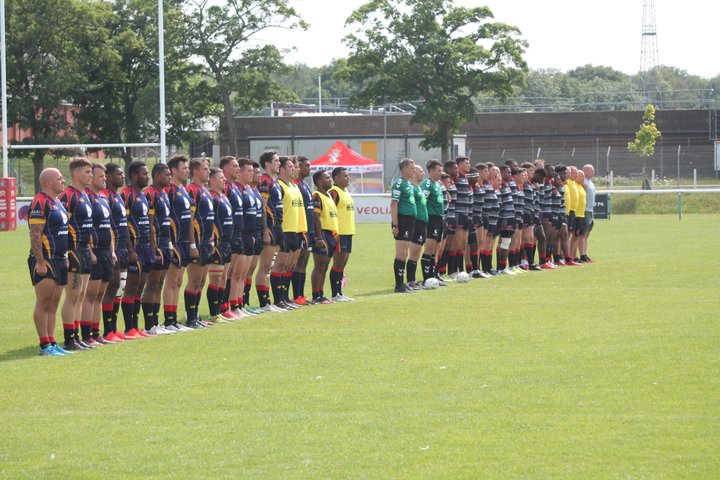 History was made in Aldershot on 23 Jul 21, as Infantry Rugby League won the Lawson Cup for the first time.

On a warm, breezy day in Aldershot Corps teams from across Army RL gathered for the finals of the Lawson Cup.

In the first game the Gunners took on the R SIGNALS in the 5th/6th play off. This was a fiery affair from the start, with the Gunners receiving a yellow and both sides receiving a red in the first half. It’s fair to say the Signallers dominated the first half, with some brutal defence, whilst the Gunners appeared to try to solve problems individually rather than sticking to the game plan. They were lucky to only go in 4-18 down at HT.

Whatever the Gunner coach said (more shouted) to his players at the break worked, as they started the 2nd half with much more structure and discipline. They were quickly rewarded with a try from a charge down and their confidence boomed. Despite R SIGNALS replying quickly, punishing a handling error, the 2nd half belonged to the Gunners as they played some brutal, relentless and clever rugby to score some great tries. At the final whistle though their efforts were in vain as the R SIGNALS managed to cling on for the win, leaving the Gunners to rue the mistakes in the first half. Final score 22-24. 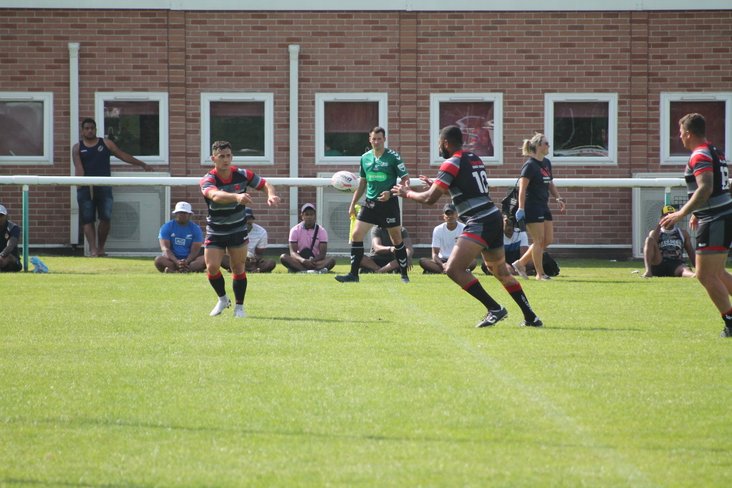 In the 3rd/4th play off game an in-experienced Sapper side took on the RLC in the early afternoon heat. It seemed pretty clear that it would be a long afternoon for the Sappers, as the RLC quickly built a lead, battering the Sapper defence time and again. By half time they were well in control at 6-20. The 2nd half followed a similar pattern, with the RLC keeping the scoreboard ticking over, despite the valiant efforts of a Sapper side whose heads never dropped, but rarely made much headway against a solid RLC defence. Final score 12-44.

So to the much awaited final between the holders REME, going for their third Lawson Cup win in three years and the Infantry, in their first final ever. An entertaining (and fiery) 1st half saw REME take the lead, playing simple RL football and punishing any INF mistake ruthlessly. Despite INF scoring a try, REME continued to stretch out the lead to 16-4, going through their processes well, seemingly in control of the game. INF, however, were having none of it. Their players dug deep and quickly scored 2 converted tries to level the game. INF then appeared to switch off and the game swung back towards REME as they took advantage of lapses of concentration to finish the half strongly and go in 26-16 up.

Thus the pattern was set for the 2nd half. REME playing the more structured game, focussed on set completion and wearing the opposition down, whilst INF were playing with less structure, possibly more flair and “unpredictability” – sometimes even for their own players! In the end, it was the latter that won through. INF came out firing, quickly taking closing the HT gap before taking the lead. Despite their very best efforts, REME appeared to have no answer to the relentless INF assault on their line and the game started to run away from them, despite the INF often gifting them territory and possession. The final whistle brought absolute scenes as INF and their supporters celebrated their historic win. Final score 26 – 42.

Lawson Cup Latest  The 2021 Lawson Cup competition comes to a head tomorrow, with the finals in Aldershot.